This Chrono Trigger updates the script of this wonderful game to modern standards, while keeping the nuanced but lovable translation and characteristics of the original script.

The hack combines the loved, quirky translation of the original SNES version, with the more extended script of the DS version, to create the best Chrono Trigger version. Compared, as well, with the Japanese original, for many lines where meanings were initially lost (mostly funny lines from era to era, but also some… surprises).

Apart from that, scenes were added that add a bit more interaction between the characters and NPCs (Lucca and Melchior, for instance). Nothing major, but small things here and there to make the journey more worthwhile, and explore having different characters in your party.

Last, and bigger in scope, more direct references to Chrono Cross story; the Frozen Flame was added as an element in Zeal, and a possibility of what could have happened with Schala, Zeal, the Flame, Dreamstone, the Mammon Machine, and the Gurus. Mostly Chrono Compendium based, but also a bit of the author’s own (original-material based) theory-crafting. Look out for the references, and figure out how the Ocean Palace incident and the fall of Zeal are explained in this version!

How to Play this Game ?

Chrono Trigger is a role-playing video game developed and published by Squaresoft (now Square Enix) for the SNES in 1995. Chrono Trigger's development team included three designers that Square dubbed the 'Dream Team': Hironobu Sakaguchi, the creator of the Final Fantasy series; Yuji Hori, a freelance designer and creator of Enix's popular Dragon Quest series; and Akira Toriyama, a freelance manga artist famed for his work with Dragon Quest and Dragon Ball. Kazuhiko Aoki produced the game, Masato Kato wrote most of the plot, while composer Yasunori Mitsuda scored most of the game before falling ill and deferring remaining tracks to Final Fantasy composer Nobuo Uematsu. The game's story follows a group of adventurers who travel through time to prevent a global catastrophe.
Square re-released a ported version by Tose in Japan for Sony's PlayStation in 1999, later repackaged with a Final Fantasy IV port as Final Fantasy Chronicles in 2001 for the North American market.
PLOT:
Chrono Trigger takes place in an original world similar to Earth, with eras such as the prehistoric age, where early humans and dinosaurs share the earth; the Middle Ages, replete with knights, monsters, and magic; and the post-apocalyptic future, where humans and sentient robots struggle to survive. The characters frequently travel through time to obtain allies, gather equipment, and learn information to help them in their quest. The party also gains access to the End of Time (represented as year ∞), which serves as a hub to travel back to other time periods. The party eventually acquires a time-machine vehicle known as the Wings of Time, nicknamed the Epoch. The vehicle is capable of time travel between any time period without first having to travel to the End of Time.

This game is, by far, one of the best games you could ever play. It was originally made for Super Nintendo platform, so it didn't have fancy graphics or cut-scenes like FF8 or FF9.

Characters are well thought and developed, they have their own goals, their own skills, their own strengths and weaknesses. Plot is simply amazing and it always keeps you on your toes (whenever I encountered a warp gate I couldn't wait to see where it will lead me). Each time and place has its own share of problems and it's up to the player to help them and slowly change past, present and future. At some points you can be nice or mean and it will change how future characters see you - will they help you for free or not?

You can do only the main necessary quests, but why? Side quests give you many powerful items that will greatly help you in the end battle against the evil that wants to destroy the earth. But the best part are skills - you have skills that only one character can perform, two characters and even all 3 of them! And it doesn't matter which 3 characters you choose (well, Crono is a must-have character for the first part of the game, later you will have an option to not have him in your squad, if you so choose)- they will always have 3-character skills, be it attacking or healing. Finishing certain quests can be done in different ways and it's so much fun to figure it out. And then there is New Game+ after you finish the play for the first time. You keep your skills, items and even your level in the New Game+, so it's easier to get through it again. That's not all, though. With New Game+ you have many more ways of defeating the main evil, so you can obtain many different endings!

This is one of the very few games that I still play - I will never get bored with it.

Chrono Trigger follows the adventures of a boy named Chrono and his friends as they embark on an adventure across time. Along the way they meet brave warriors, legendary villans, and carve their names into history itself. And soon, they realize that they are the only ones capable of stopping the apocalypse itself.
But seriously, this is one of the greatest RPGs of all time and for good reason. The game features a nice combat system, sweet music, a good story, and a dash of humor. The game does a good job of sticking to the story without sending the player on bothersome sidequests or grinding missions. Of any game invovling time travel, this one probably does the best job of using it without seeming gimmicky. It also has multiple endings! For its time, and even by today's standards, a truly legendary game!

Now you can add videos, screenshots, or other images (cover scans, disc scans, etc.) for Final Fantasy Chronicles - Chrono Trigger [NTSC-U] to Emuparadise. Do it now! 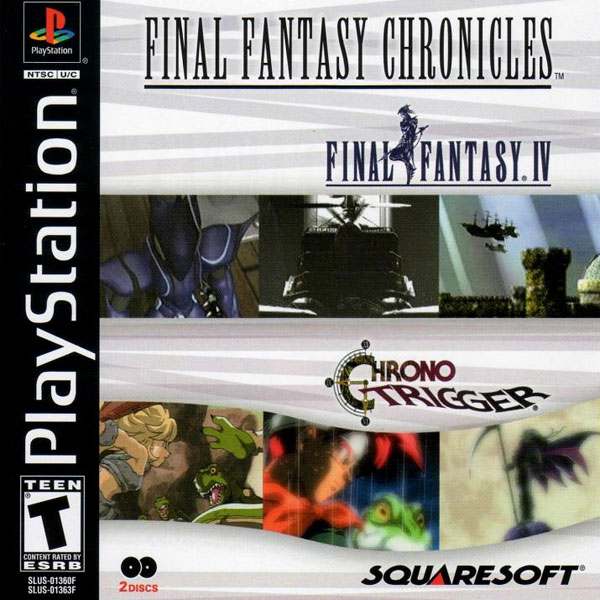