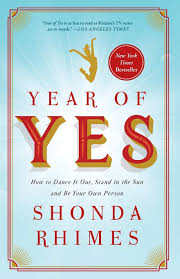 “You never say yes to anything.”
Shonda Rhimes is the master behind shows like Grey’s Anatomy, Private Practice, Scandal, and How to Get Away With Murder and her recent book Year of Yes.

Year of Yes is her story about saying YES for a whole year all sparked by the words of someone who knows her best: her older sister Delores.

On Thanksgiving, Rhimes was telling Delores about the fantastic (and envious) invitations she was getting. Delores stopped her dead in her tracks by basically replying, “Who cares? You’re just going to say ‘no,’ anyway.” There’s nothing like the cold, hard truth for dessert when you were expecting pumpkin pie.

She knew it was true. Rhimes said ‘no’ too often because of her debilitating social anxiety and her unhappiness with her weight. She stayed in her comfort zone, living her life vicariously through the characters she wrote onto the screen.

It may sound easy to say yes to things like sharing a box with President Obama and Michelle Obama or posing on magazine covers. Still, the opportunity’s glamour and prestige don’t make saying yes any easier without self-love and acceptance. How could you say yes when you feel you’re unworthy of it?

It all changed when she committed to saying yes to everything for one whole year.

And so the first yes she tackles is an interview with Jimmy Kimmel about her political drama Scandal. Each new yes poses a new threat and is challenging in its own way. But with each ‘yes,’ she becomes more comfortable and willing to embrace challenging moments – moments of growth.

In that first year of yes, Rhimes becomes a master of her own life.

The bottom line, which Rhimes said herself, is “Ditch the dream and be a doer, not a dreamer.”

Saying YES is an action, and with it, you become the doer.